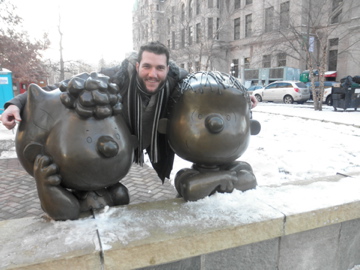 The plan after Thanksgiving was to drive to the Twin Cities and spend the next two days getting the VIP tour of the area, but we were having too much fun in Geneva.

We decided to stay one more day. Zak’s cousin, Dusty, took us shooting on the family farm. Olenka, our Texan, had NEVER shot a gun and It had been eons since I had. It was a blast! There is something exhilarating about shooting a gun in sub-arctic weather. It makes you feel alive! Afterour fingers were too frozen to pull a trigger, we got a tour of the farm. Olenka fell in love with a John Deere tractor. Olenka and her tractor

When we got home from the farm we started playing Wizard. This game has you try to correctly guess the number of hands you will win and then scores you according to your accuracy. The competition was fierce, but I brought my game-face and won. After several hours of play, we switched to pool – where I was schooled.

The next morning we woke up early and headed to St. Paul and Minneapolis. These “twin cities” are built on either side of the Mississippi. What beautiful cities! The stone architecture reminded me of some cities in Europe. We started in St. Paul making our first stop at Nina’s Cafe. I had a delicious tea and took a picture for Kristina. It was a block from the magnificent St. Paul’s cathedral. A HUGE church, that reminded me of the other St. Paul’s in Vatican City. St. Paul and Minneapolis are the home of Charles Schulz of Peanuts fame, so I had to get a shot with Linus and Lucy. We toured two Christmas markets and then ended up in an Irish Pub complete with a fireplace and board games. We played games, laughed, drank, and ate. It was lovely.

The next morning we climbed in the car and headed back to Chicago.

I love seeing these little pockets of America. There is character in every little town and an attitude in each city of this country. Take a chance and go explore.