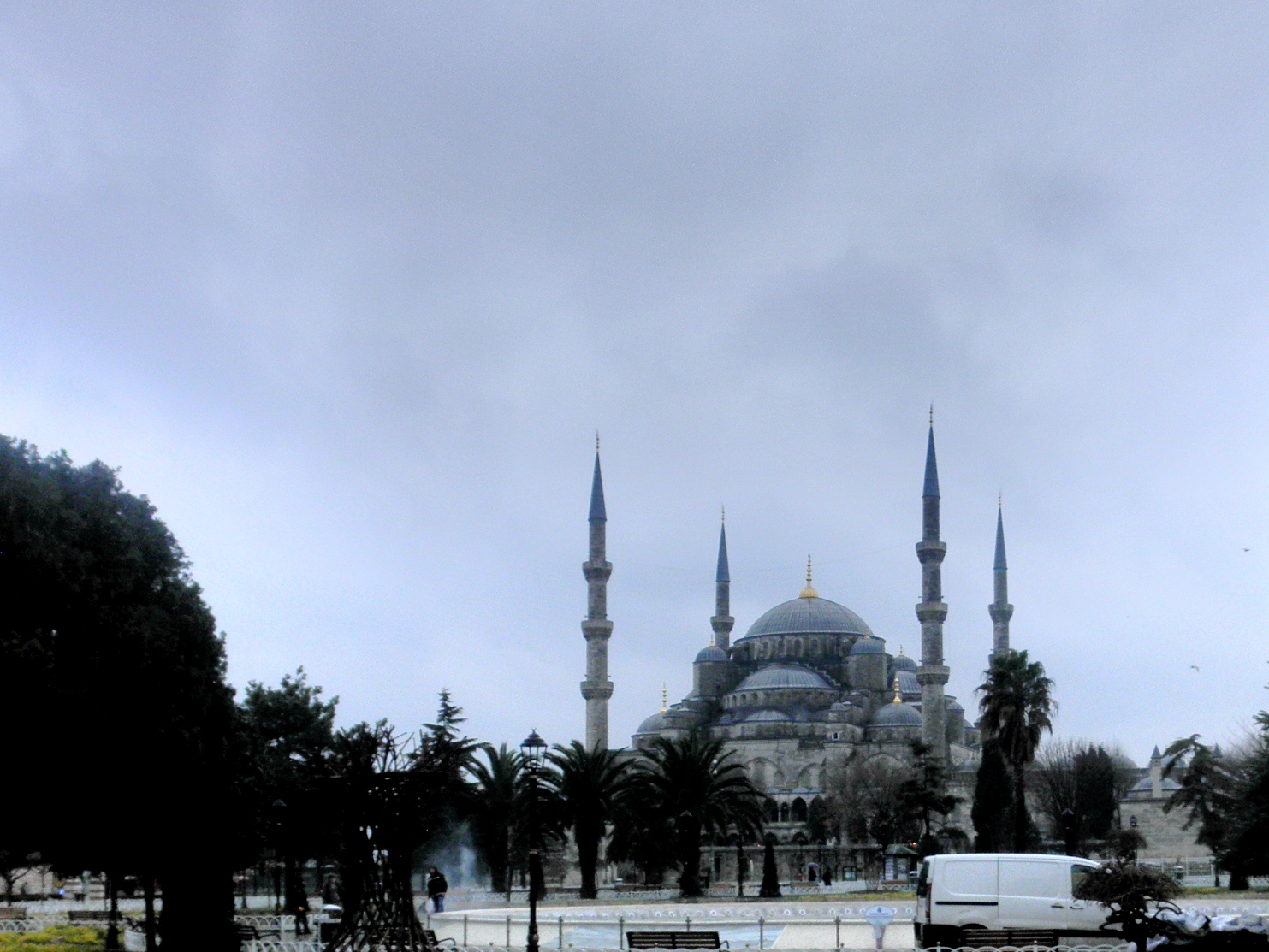 This relates my short experience in Istanbul during my layover. It is in two parts. Part 1, Change, was written in the airport while waiting for my phone. It contains my thoughts, perceptions and expectations. Part 2, 17 hours in Istanbul was written after I had returned from the city. Enjoy!

I am dumbfounded by how fast change can happen.

I’m sitting in Turkey’s national airport, Istanbul. This morning I was in Chicago. Hop on a plane and I am now on another continent. It’s like I have stepped into a different world. It’s hard to find people who speak English, my hotel reservations have fallen through, and I am currently paying to have my phone charged. I did get a delicious pastry though. To get into the country I had to pay $30 for a visa. Online it is $20. I hate to think that the precious hours that I have in this amazing city are being spent sitting on a floor typing waiting for my phone to charge.

Looking out, I can envision what this city used to be – an ancient bridge between the orient and europe. The fantastic bazaars are still bustling and the cultural mash that is characteristic of the city is still alive and well.

I just wish I could get out of the airport. All of the signs are in Turkish/English, but I still am having a difficult time navigating – It is all so different.

Turkish airlines might be my new favorite airline. They started the journey with a piece of Turkish Delight. The food was fantastic (seafood) they gave a warm towel, socks, slippers, headphones, a mask, earplugs, toothbrush and anything else I may have needed (including lip balm) The stewardesses were so kind.

But this airport is unsettling. It feels like I am in a different world.

The clock is ticking and soon I won’t have much time to explore this city.

Hurry up and charge!! Waiting for the metro to take me to the city

I had 17 hours in Istanbul before I had my connecting flight to Madrid. Who wants to sit in the airport when you are so close to such a historical city!?!

I made it by metro into Sultahmann around 9:00. By this time I had gone on a quest to find an adapter for my phone. (They wanted 60 TL – $30 – for one in the airport. NOPE!). My phone was dead when I hopped off the train.

I was floored. To my right was the Sultahmann Mosque (known as the blue mosque) litup in the night sky. To my left was Hagia Sophia, it’s giant dome and turrets sparkling in the night. I walked and found a storefront selling adapters for 5 TL ($2.50) much better. All of the sites were closed because it was later in the evening. I walked around the mosques and down the cobblestone streets. Did I mention it was raining? The whole time. I think I’m permanently damp. I found an internet cafe and tried to convey to the person at the counter that I didn’t need to buy an adapter, I just needed an outlet. After struggling I had my phone charging and was trying to send an e-mail on the computer to my anxious mother. The keyboard was different, it had three letters that looked like “i”, but none of them would type it. I sent a very misspelled e-mail to my mom letting her know that I wasn’t dead.

It was this time that I decided I didn’t want to sleep at the airport – that I would find a hostel instead. I looked online and found one 2 minutes from where I was at. I scribbled the directions grabbed my phone and headed over. Or at least I thought I did. It wasn’t where it was supposed to be. I wandered for an hour looking for that damn hostel to no avail. It was pouring by this time. I went and spoke to hotel after hotel (there are over 3,000 hotels in istanbul) asking for directions and kept going in circles. Eventually I ended up in front of 2nd home hostel. It wasn’t the one I was looking for but I thought it was worth a shot – maybe they could help me find where I wanted to go.

I knocked loudly on the front door and someone came to answer. A cat jetted out of the rain and into the room where she joined her kitten. There were several people drinking around lunch tables and I found the person in charge. They told me that I was close and to keep heading the way I was going.

I was sick of running in circles so I asked if they had a bed. They did! I decided that Istanbul Harmony Hostel would be better called the hidden gem of istanbul – so well hidden it is invisible.

I went and dropped my things off on my bed and headed back upstairs to say hello. I met Levi, from Eastern Canada, Hannah, from South Dakota/Amsterdam, and Yusef. They were about to pull the hookah from the corner. That’s not my style, but I stayed to talk. Hannah was interesting (and extremely inebriated). She was talking about how she got hit by a car and because of that settlement she won’t be able to run a marathon – but can travel Europe. She said something about being totally in the present, living life one moment at a time. This is a theme that keeps coming up around me. Mindfulness. taking the time out of the now. Not to worry about the future or dwell on the past – but just breathe and enjoy being. After a quick chat my jet-lagged self was ready for bed. I set my alarm for 7:00 AM, not wanting to miss much of Istanbul.

I slept well until my body decided that 4 AM was enough sleep for me. I heard the muslim call to prayer from my bed – beautiful. It was too early to get up so I chatted with my sisters and dad until the sun peeped it’s head up and then got up and out the door.

I walked down the street towards the Blue Mosque – I wanted to go inside it. This time the gates were open and I could go into the courtyard. It is incredible. So few things in life make me feel small, but this was one of them. It was still to early to go inside the Mosque so I decided to make my way down to the water. I had spotted it earlier and wanted to at least see it. I made it to the ferry dock that was home to 100 resting seabirds. I glanced through the mist and could see the bridge connecting Europe and Asia. I didn’t have time to find and cross it – next time. I wound my way up, past an ancient wall of a castle (from 700 BC) back up to the Blue Mosque. Enough time had passed that I could now go inside. I took off my shoes and wrapped them in a plastic baggie and went through the doors. The floor of the mosque was a beautiful soft carpet. Low hanging lanterns were suspended from the ascending walls and arched dome of the mosque. The blue tiles for which it was named) shimmered in the morning light. And there were a lot of tourists with selfie-sticks. In the religion, you are not to make any graven image of God, and so the walls were decorated with beautiful calligraphy instead of images and statues. I left and headed to the Grand Bazaar. This indoor marketplace is home to over 4,000 stores, each through winding halls and corridors. It was easy to get lost. The smell was intoxicating as spices were weighed and sold from the racks that seemed to go on forever. Every corner shimmered with silver, gold, antique rugs, tiles, jewelry, and anything else you could imagine. It was bustling. I noticed the care that each shop owner had for their shop. They would often sweep the front of the store, or dust off their precious pieces. I wonder if their fathers had owned the shops before them, and their fathers before that. I pulled myself away from the wonder and headed back to the airport. But not before eating some more of the DELICIOUS food. I don’t even know what I had, but it was amazing! I know I had some baklava, and an eggy pastry.. but that’s the extent. The flavors and textures were extravagant. I got back to the airport with plenty of time to board for Madrid. As we flew out of the city, I couldn’t help but think of the surprises I had there. I know I will be back, and this time I’ll come prepared.